Amidst tears and candy, this week brought both expected and surprising news of departures, a welcome reminder of progress, and a spooky and worthwhile holiday.

This week felt like a ride to me. I told my therapist that it was a bit of a rollercoaster—not because there were ups and downs, but just a number of downs. Ironically, we went on to discuss all the wins that occurred. It is easy to forget how much more negative emotions stick with us, and can skew our sense of how things are going.

The backdrop to everything that happened this week was my continuing recovery from hernia surgery, as I wrote about last week. On top of the physical pain I was feeling, I went through an emotional ringer this week.

The first blow was not unexpected, but it came sooner than anticipated. Earlier this year, I started an apprentice program on my team. We lucked out with our first hire, and she was more capable than we expected, both in initial ability and in how quickly she progressed. I had secretly hoped that I could find a permanent position for her, but I was working to prepare her for full-time employment. So when I found out she had accepted a great offer, I was both genuinely excited for her and emotionally devastated. I ended the call with her by expressing sincere congratulations, hung up, and started sobbing. The ability to hold conflicting emotions at the same time and give them each space has been a hard-won skill in my mental health journey.

The follow-up blow came as a complete surprise. One of my closest friends at work, my partner in leading the mobile team, the person that I consistently work the closest with, our product manager also accepted an offer at another company. It is a great move for him with more growth opportunities which will be a meaningful step forward in career. It will also mean a much shorter commute and more family time, if commutes ever become a thing again. With him, I have enjoyed the best working partnership I have seen in my career, let alone been part of it. We were in sync from the moment he joined our team, and often spoke for each other with complete confidence that we knew the heart and mind of the other. Again, a paradoxical mix of emotions flooded me.

There were other things that came up during the week that continued to stretch and try me. The overwhelming and consistent theme was that of uncertainty. I just started the apprentice program this year, and am not sure if I will get budget to hire another. I fought long and hard as I took on the engineering manager role to get a product manager dedicated to focus on mobile, and am left wondering what the future will look like.

My wife asked me an insightful question as I was telling her of these losses: what was affecting me the most? Was it the personal relationships? Was I concerned about replacing them? Was I worried about the hard weeks and months ahead navigating change? As I thought about it, I realized it was the loss, or at least change, of the personal connections that hurt the most. These were two of my favorite people to work with, when factoring in the frequency and pleasure of interactions. We had to pause and laugh at OCD poking its head in strong with that quantifying chart that could plot the overall satisfaction of work interactions. It is a great reminder that people matter most.

As I was waiting for my therapy session to begin on Friday, I was thinking about what I would write this week. The section on something hard was a no-brainer, but I honestly could not think of anything for this section about something good. I decided I would just wait for the weekend and hope something went well.

I announced to my therapist that it had been “a hellish week” and started telling her about all that happened. The beautiful thing was that as I was discussing the week, I paused a number of times to realize how well I was handling it all. In my one-on-one with my manager in the middle of the week, he took some time to acknowledge how difficult and painful it is to lose someone in the kind of partnership that I have had. Then he also told me that he knew I would be able to lead my team through this with a calm, stabilizing influence. My therapist and I discussed how much I have grown over the past couple years that I could handle this kind of emotional load. And it was so empowering to have that trust expressed in me by my manager.

After I finished relating the tale of the week, my therapist said something that made both of us laugh.

The way that you are describing the week, it almost sounds like you don’t have crippling OCD.

We went on to discuss that the defining theme of the difficulties from the week, as I mentioned before, was uncertainty. In addition to that, there was a wide range of emotions, and I was able to make space for them, without any of them invalidating others as would often happen in the past. These are skills that everyone can benefit from in their lives, but often do not have an acute need to develop. Because I have gone through mental health struggles, I have spent considerable time training my brain to sit with uncertainty and learn how to ride through the initial burst of panic and fear that accompanies it. As a result, when I face difficult situations, I am prepared. I can honor my experience, and deliberately choose how I will respond and move forward. I do not know what to expect from the next weeks and months, but I know that I am equipped to handle hard things.

Here in the United States, we celebrated Halloween last Saturday, October 31. I was reminded that this is not a universal holiday while on a call with some colleagues in India, who asked for an explanation of what we do and why. It made me think about the holiday, and some of its peculiarities.

There are definitely some dark sides to Halloween, but overall, it is a holiday that our family enjoys immensely. I have decided that there are at least three benefits from it:

There seem to be few people who are comfortable in their own skin, and have no problem standing out or being different. Most of us feel pressure to conform to societal norms in our dress and behavior on a regular basis. Halloween represents a type of official permission for children (and adults!) to dress in ways that would be considered bizarre, distracting, or inappropriate at other times. 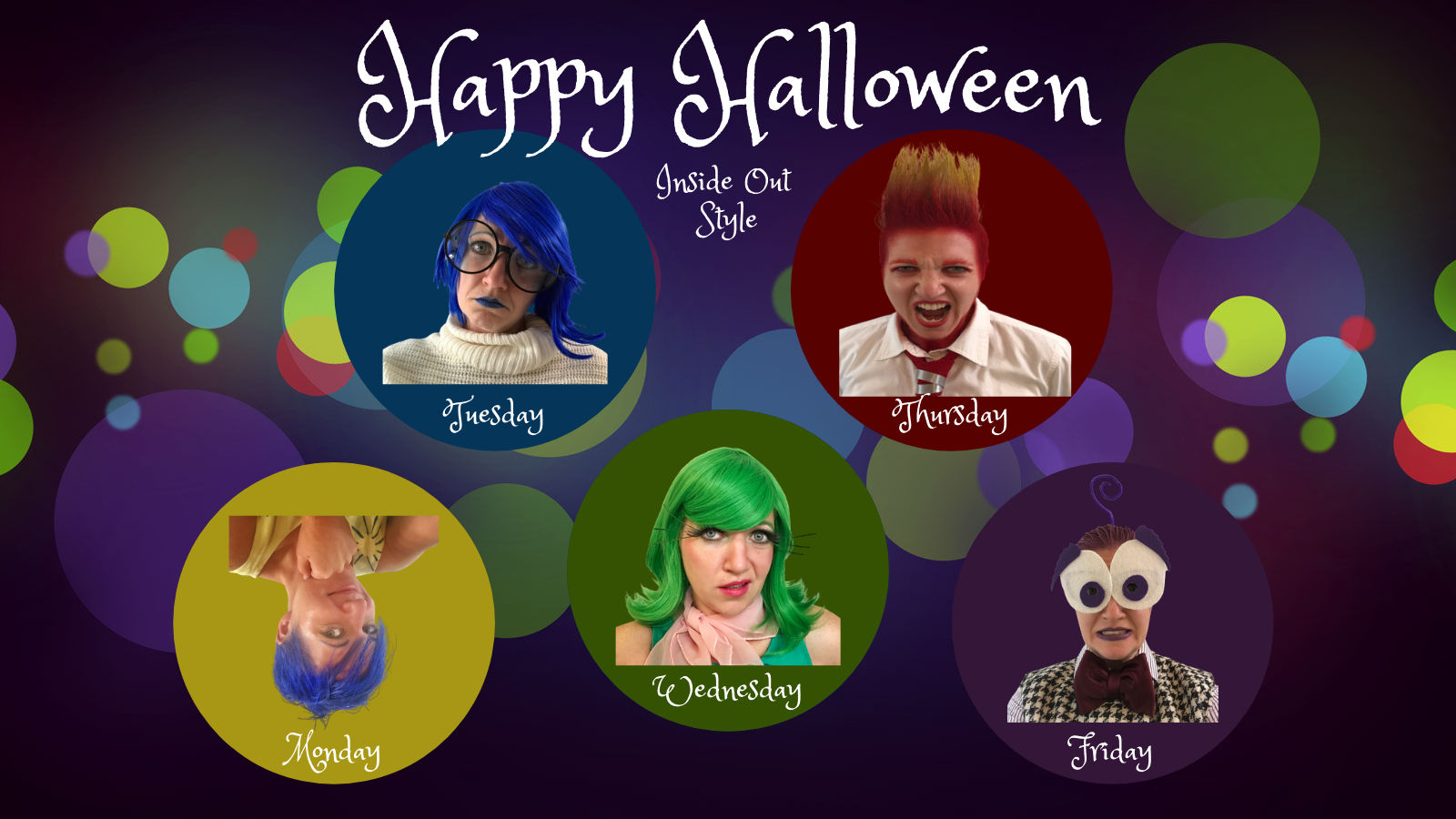 One of my friends at work, Jessica Young, dressed up as different characters from Inside Out1 throughout the week. While she is one of those rare people possessed of confidence to be herself generally, this holiday provided an outlet for even more creativity than usual. And the same is true for so many people. I think that is a great thing.

Obviously in 2020, this is a harder topic, but even in the best of times, our sense of community is lower than at almost any time in history. Especially this year, the chance to pass people in the streets provides an opportunity for connection that we all need.

For years, and in a few different neighborhoods, Halloween has provided a rare chance to visit nearly all of our neighbors. In some ways, it is a sad thing that outside of this one night a year, I would rarely go through the streets by our house calling on neighbors, and in other ways that feels normal.

While it is strange in a way that we all go around begging for food, I find a certain beauty in the implicit agreement. Not everyone participates, and no one is obligated—a darkened house is the only signal needed to be left alone. But nearly everyone contributes in this night of generosity.

There is a certain level of irony in the arrangement. My friend had to tell his two young boys to stop taking candy out of the bowl on their porch—they were only supposed to take candy from other people on this night. It is essentially a candy exchange, as we give candy to anyone who comes to our house and in turn take candy from everyone else’s house. But I think it is a wonderful thing for us to all come together in a night of giving, even if most of us expect to get something back in return.

I am glad to have this week behind me. While it was a great reminder and validation of how far I have come, I could do with a lighter emotional load. The uncertainty that was generated from all that happened this week will be my companion for the next weeks and months. But if there is one thing I have learned to live with, it is uncertainty.

🎉
You subscribed with [email] on [date]. Thanks for joining me!
END_OF_DOCUMENT_TOKEN_TO_BE_REPLACED