OCD is a funny thing. As I have done more speaking about mental health, I have had conversations with people about their own experiences. I have come to see that we are all on different spectrums, OCD included. The question is when our tendencies or behavior becomes an actual disorder. I was discussing this idea with my therapist recently, and she said that the line is where your life is impaired. For me, the biggest area of life where my disorder showed up, and continues to show up, is in my relationships. Especially with those closest to me.

Another defining characteristic of OCD as a disorder is the loss of time. When compulsions start to take over your life, you spend unwanted amounts of time performing them. It is distressing to see the effect, and want to stop, but feel unable. It is miserable.

The most effective treatment for OCD is ERP, or exposure response prevention treatment. Done with a trained professional, repeatedly exposing yourself to situations that cause distress can help your mind escape the grasp of obsessions. Most of my recovery involves recognizing those urges and resisting them. Not fighting them, because that gives them more strength, but choosing to not act on them.

There are times, however, when I just choose to give in. My therapist and I talk about those times. Ideally, it is in a situation where it is not impacting relationships.

Over the weekend, my wife and I had talked about getting a new iPad for the family. The kids’ iPad is about nine years old, and the corners of the screen have broken, leaving sharp glass edges. On Monday, I woke up and decided to get a new one. That day. I planned to drive over to Best Buy, which is right by my office, and pick one up.

There was a wrinkle though. Apple had just released the new iPad mini the Friday before. The iPad mini was one of the first that I bought for myself, when it came out in 2012. For the past few years, my work has provided me the largest iPad Pro. I have loved it for sketchnoting and working. If I’m not programming, I prefer to be on my iPad. But the mini was one of my first loves.

So when I decided to get an iPad for the family, I also decided that I would get a mini for myself. The problem was that it was released one business day before. I could order one, and it would arrive in a couple days. But as I searched around, I found that there was one available at the Best Buy in Park City, which was about an hour drive from my office. However, they did not have a case. Again, I could have ordered one and had it in a few days. But I found one in stock at the Apple Store in City Creek in Salt Lake, about 40 minutes from my office.

I went back and forth on what to do. I knew what was wise and responsible. I knew what I wanted. And I finally decided that even if it was an OCD moment, I was choosing it.

So I drove the three hours to make it all happen. I justified it to myself (which is a classic OCD behavior) by thinking through some issues around my family. The previous day, I had a major struggle that I’m not going to discuss, but it had left me with plenty on my mind. One of the benefits was seeing the changing leaves in the Park City and Heber area, which were stunning.

And I had my iPad.

OCD won out that day. But since I chose to let it win, maybe I actually won?

Last April, I wrote about watching the biannual General Conference for our church. This conference occurred again this past weekend, and it was delightful. We rearranged the house to make it easier for all nine of us to be together, listen to the conference, and engage in different activities. We still have coloring books and puzzles and all manner of debris in the living room on and around our massive table we moved in there.

General Conference was one of the reasons I wanted to get the new iPad right away. One of my favorite activities with these conferences is to capture sketchnotes. It’s always uncertain whether it will work out. A few years ago, my wife suggested that instead of trying to capture a whole talk in sketchnotes as I was accustomed to doing, I might try doing a synopsis. Each session is two hours, with 6-8 speakers or so, and I pick out one main point that resonated with me from each talk and sketch that. It has made a big difference in my stress level. I am able to easily pause and help with the children or handle any other interruption without the distress of missing things entirely. 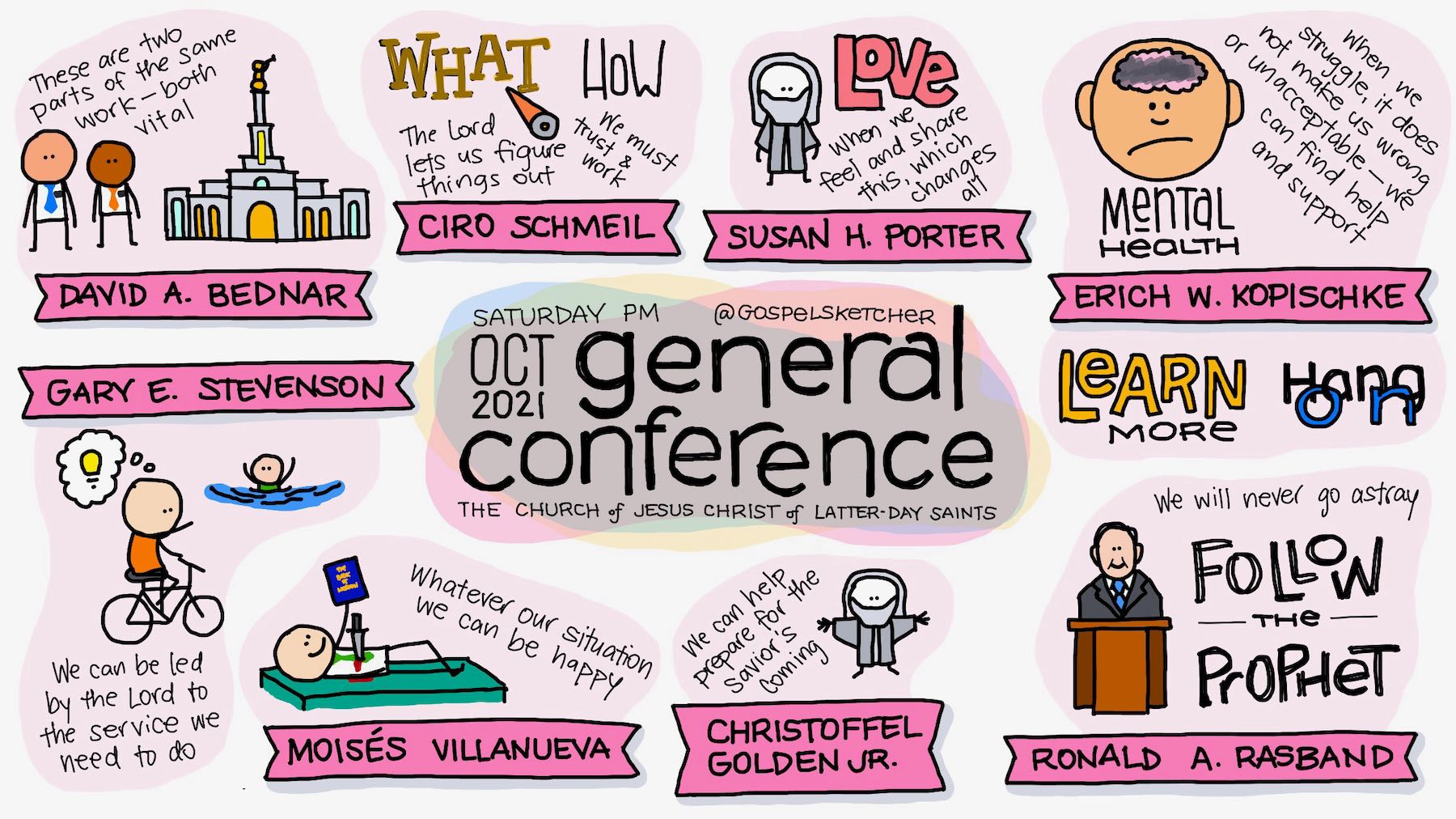 I was so glad I was able to sketchnote again this time. I collect all of my religious sketchnotes at Gospel Sketcher on this site, and these more specifically with the General Conference tag. It has been a great way to engage with meaningful content that brings me peace and comfort, and makes reviewing and sharing much easier.

Finally, this past week included a few delightful social interactions. I will often go weeks or months without doing anything with friends. But last week, I crammed in three events. I had a wonderful lunch with one of my favorite people who has been my friend for nearly eight years. My wife and I had a date with another friend and his wife, whom I have known for 17 years. And finally, on Sunday, I had a football watch party with a new friend of the past couple years, the father of my daughter’s best friend.

I was reminded what a boost it is to spend time with people. Particularly people that matter to me. It can be easy to interact with people regularly without taking the time to truly engage or connect. As I share in my mental health presentation I have delivered to many different groups at work, when you feel like you don’t want to be around anyone, that’s the time when you need it most.

While there were some serious difficulties in this past week, there was so much good as well. That’s probably true for all of us, nearly all the time. We will all benefit from connecting with people who love us. They will often show us the compassion that we are struggling to show ourselves. We need that kindness. And when we’re able to, we need to share it with those around us.

🎉
You subscribed with [email] on [date]. Thanks for joining me!
END_OF_DOCUMENT_TOKEN_TO_BE_REPLACED